“The culture of any organization is shaped by the worst behavior the leader is willing to tolerate.”  – Gruenter & Whitaker

As a leader of an organization, department or division, it is imperative that you have a great team to work with in order to succeed. It is equally imperative that you provide your team with a positive culture to work in.  As a leader, you create the culture of your environment. If you are in a place where culture is subpar, it is up to you to not only lead by example, but to focus on your team in order to accomplish transformation.

In 2012, Dr. Natalie Harder became the Chancellor at South Louisiana Community College (SLCC). Four months later, SLCC merged with another college. Both institutions were dealing with declining financials and enrollment, plus bad morale overall. In order to combat these issues, Dr. Harder pulled the leadership teams of both institutes together to address issues and strategize. After months and months of going through the motions, Dr. Harder realized that the desire to really change the problems and the sense of urgency among her team was non-existent.

During a recent Destination High Performance conference in New Orleans, Dr. Harder shared this story in a keynote and how she felt as if she was on this transformation journey alone. Her first thought was that she wasn’t being clear enough with her team. She continued on her fight to transform SLCC, but ultimately felt as if the organization wasn’t responding accordingly as the same issues kept arising year after year. She didn’t know who the problem people were, her staff was reinforcing silos and giving excuses for not following processes. About this time is when SLCC completed our employee engagement survey for the 2015-16 year. This survey addressed about nine different areas about how employees feel about work and if your organization is a “good place to work.”

In her keynote, Dr. Harder shares that SLCC’s employee engagement survey that year revealed the lowest overall score that Studer Education has seen within the higher education sector.

“There it is in black and white. For all of my hard work, what had I done? I didn’t help the institution at all.”

And that’s what SLCC did. For the next year, Dr. Harder focused on her team and her team focused on the institution so much so that at the second-year survey, they saw significant improvement. “[These results] told me that even if we didn’t get everything done or what we did do wasn’t perfect, working on the team aspect of SLCC is what made the difference.”

In one year, the senior leadership score had the highest movement. By the time the fourth year survey came around, the scores overall across all teams had increased pretty drastically. In this last year, their scores were either tied with the previous year or the highest score in every single category. “It doesn’t take 20 years to make change…We knew that internally we were changing our culture and that our transformation was going on. Those three years were three years of waking up, building a kick-ass team and repeating. And then my team waking up, building a kick-ass team and repeating.”

“If you wake up and focus on your team every single day, I promise you that the transformation, the culture within your program, department or division, it can change! If you don’t take anything else from my discussion, I want you to focus on that. I promise you that you can really be successful on behalf of your students.” 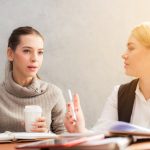