IMPACT IN THE INTERIM

From 2013 until 2019, University of West Georgia President, Dr. Kyle Marrero, led the University to achieve records in enrollment, graduation rates, and to develop new student-centered partnerships. He worked to develop a strategic plan within his first year and established Engage West, their continuous improvement movement. In 2015 UWG was selected as the Institution of the Year and Marrero as the President of the Year by the Chancellor’s Service Excellence Awards.

UWG established a mantra: Be the best place to work, learn, and succeed.

In January of 2019, Marrero announced that he would transition from UWG to become the President of Georgia Southern University. At this time, UWG’s provost, Micheal Crafton stepped up to become the university’s Interim President beginning April 1.

WHAT HAPPENS WHEN THE LEADER LEAVES?

During Crafton’s presentation at Destination High Performance this past September, he spoke about Marrero’s departure. “He left and so we have to fill in or stitch over all of the missing parts that result when a key leader leaves campus. And in our case, it wasn’t just the President, but he also took with him the Vice President for Student Affairs and the Director of Communications.”

The Age of the Interim

A leadership transition can often have a ripple effect causing engagement, performance and accountability to decrease. People feel uncertain and anxious about their jobs and the direction of the organization.

In UWG’s case, five other leadership positions were also vacant for various reasons at the same time. Thankfully, UWG was prepared for a transition and actively engaged in succession planning, “We already had a sense of how we could come together as a team and solve this problem,” Crafton explained.

Appointing interims is the first step, but what else needs to be addressed? Crafton admits the Engage West movement as a whole came into question. Employees were at a loss about what to do now that Marrero was gone.

WHAT ABOUT ENGAGE WEST? 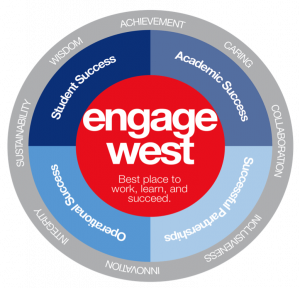 Some employees wanted to give up all together. They no longer felt accountable to the movement.

Crafton knew during this time that the employees needed him and other leaders to role model accountability. The executive team met and decided they were proud of what Engage West had accomplished. They also discovered the importance of maintaining that momentum while being open to making changes. They decided to view this transition period as an important opportunity to care for and connect with their employees.

When the leadership team met with employees they focused on 3 objectives:

“Once we opened it up and said we’re willing to talk about anything and change anything, there was an overwhelming support for the program [Engage West]…there were suggested changes, but they were minor,” reflects Crafton.

What Did UWG Change?

Crafton knew any changes he made during a transition would need to be sensible and evidence-based. As an interim leader making too many changes can further disrupt employees and the organizational outcomes. It’s important to be cautious of voices that are taking advantage of the transition period by asking for unnecessary changes.

In some cases, needed changes may not have been obvious before the transition. However, now that they were surfaced, this was a good opportunity for the interim to effect positive change.

The team at UWG realized three opportunities for improvements to their Engage West approach:

© 2019 Huron Consulting Group Inc. and affiliates. Huron is a global consultancy and not a CPA firm, and does not provide attest services, audits, or other engagements in accordance with standards established by the AICPA or auditing standards promulgated by the Public Company Accounting Oversight Board (“PCAOB”). Huron is not a law firm; it does not offer, and is not authorized to provide, legal advice or counseling in any jurisdiction. Huron is the trading name of Pope Woodhead & Associates Ltd.
0
EP44: From Problem to SolutionAccelerate Your Performance, Podcast
EP45: Presenting Problems as OpportunitiesAccelerate Your Performance, Podcast
X
%d bloggers like this: